This week, all-of-us whistled while we worked as we watched the bad news roll in for Trump. Given all the fireworks, you probably weren’t paying attention to much else. That’s alright -- that’s what we’re here for.

On September 24th, Congress finally held its first hearing on the Muslim Ban. Thanks to @ewarren for calling the Muslim Ban what it is: 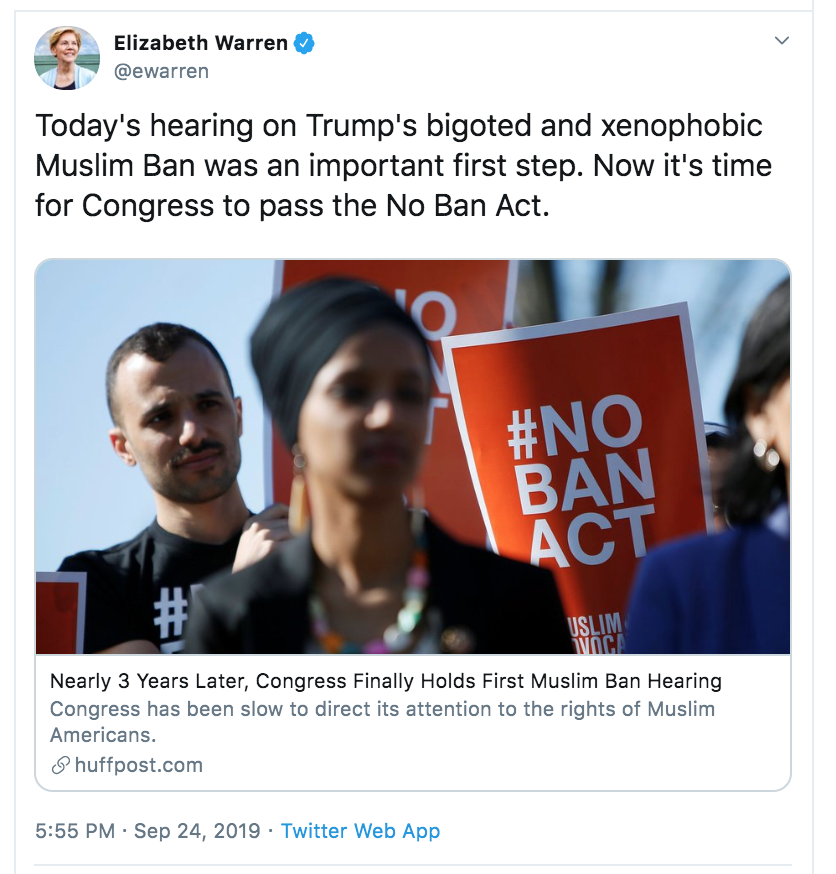 Just in case you need a brush up on the #MuslimBan, let’s take a trip down memory lane.

During his campaign, Trump promised to ban Muslims from entering the U.S. (he promised other sexist, racist, and xenophobic stuff too and got elected anyway!). In 2017, Trump signed Executive Order 13769, which prevented individuals from several Muslim-majority nations from entering the U.S. The ban was struck down by a number of federal courts, but Trump kept applying more lipstick to the pig. In 2018, in the case of Trump v Hawaii, the U.S. Supreme Court upheld the ban. All-of-us are grateful to Justice Sotomayor for speaking truth in her dissent:

By blindly accepting the Government’s misguided invitation to sanction a discriminatory policy motivated by animosity toward a disfavored group, all in the name of a superficial claim of national security, the Court redeploys the same dangerous logic underlying Korematsu and merely replaces one “gravely wrong” decision with another. Our Constitution demands, and our country deserves, a Judiciary willing to hold the coordinate branches to account when they defy our most sacred legal commitments.

Because the Court’s decision today has failed in that respect, with profound regret, I dissent.

Earlier this week a number of companies including Airbnb, Slack, Spotify, Twitter, and Uber wrote a letter to Congress and announced their support for the No Ban Act. Their letter states, “Nearly half of the top 100 companies on the Fortune 500 list were started by an immigrant or their children. The travel ban sets an unnecessary limit on the number of ambitious people from around the globe who can bring their great ideas to the United States”.

Whether our immigrants come here to flee violence and seek asylum (as I did) or to bring our awesome ideas to this country (as I also did #wall-of-us!), accepting immigrants has always been the American thing to do.

Thankfully, a number of House Democrats agree. Rep. Judy Chu (D-Calif.) and Sen. Chris Coons (D-Del.) proposed the No Ban Act which would end this Muslim ban and prevent future presidents (not Trump) from enacting anything similar. All-of-us must make sure that the No Ban Act is passed by Congress.

Call your representative and ask them to support the No Ban Act.

Login to record your actions.